This was my first 70.3 distance race. This race is proof that anything is possible. I ran my first 5k in 2012 and was dying, 2013 I ran a half marathon, 2014 I ran my first full and in 2015 I had completed a sprint and an Olympic distance tri in the last 2 months leading up to Muncie in July. Never in my wildest dreams in 2012 did I ever think that running a marathon was possible, forget completing a run after swimming and biking.It was my buddy Shariq ( my guru) who made me sign up for my first 5k and I think its  awesome to complete the 70.3 with him(its his first 70.3 as well). In Jan 2015 I could barely swim 2 laps in the pool unbroken, the thought of swimming a mile seemed insane but I did find a coach and after spending 4 days a week in the pool, things worked out well.  I did not follow a structured triathlon plan, just Swam Bike and Ran when I felt like and made sure I hit each discipline at least twice a week.I was pretty confident heading into race since whatever could have possibly gone wrong had gone wrong  in my Olympic tri in Detroit. The only thing I was concerned about was the rain, I was hoping it did not rain during the swim portion of the race.

I did a lot of research prior to deciding on taking Muncie as my first. I could drive down, I was fine with it being hot but did not want to pick a race if there was even a slight possibility of it being chilly. I guess when you’re born and brought up in the Indian subcontinent , you’re not really a big fan of the winter. Reading about Muncie in other blogs, it was crystal clear that the bike course was going to be flat and the run was hilly.

I had booked this place called Muncie Inn and reached Wednesday night. The place seemed pretty shady and the rooms weren’t spectacular, no microwave no fridge, but I was no in mood to figure stuff out at 11 PM and a find a better motel keeping in mind that I had to pick my buddy up the following  morning at 5 AM from Indianapolis . We just chilled on Thursday, got our bikes serviced from a bike shop, picked up my girlfriend from the greyhound station at 10 PM and hit the bed.

Friday I was all pumped for the expo/packet pickup, it wasn’t raining that much just drizzling occasionally. We got to see some kick ass bikes with shiny ass carbon wheels and all I could think was damn it makes your bike look fast , and for those of you unfamiliar with carbon wheels, its getting the latest alloy wheels but they make you go slightly faster and are expensive as fuck (~1800/wheel)!

Race packet pick up was pretty organized, we were given out swag bags, swag t shirts signed waivers,tracking anklets, bibs .

After that it was just us checking out the expo and my buddy and I were trying to figure out the swim course since they hadn’t laid out all the buoys. People were already talking about the race not being wetsuit legal since the water temperature was around 73 and it was raining the entire week. Personally I was hoping for a non wetsuit legal swim just because I felt more comfortable without the wetsuit the last time I practiced an open water swim.

In the evening, my buddy and I decided to bike for 15 min and run for about 10-15 min just to get ourselves ready for race day.

We got up early, but not early enough. We had picked up oatmeal, bananas , bars from Walmart the night before , went down to the front desk and used the common microwave they had in some backroom. Got our breakfast in , racked our bikes, tossed everything into the car and drove down Praire Creek. It was a welcome site to see a traffic jam at 5 15 AM with bikes raced on the cars. We did find parking, unracked our bikes from the car , pumped the tires and started walking towards the transition areas to set up our bikes. My girlfriend wasn’t racing but she was equally a part of it, she carried our wetsuits , held our swim caps etc while we waited in line for the Port O Johns and took a ton of pictures of/for us.

The 25-29 was the last age group wave for the swim, so we had time to lube our necks up and take our own sweet time to get into the fucking annoying wetsuit, the swim course was marked by 19 buoys, yes 19, every 100m there was a buoy.

We got about 2 min in the water before we started, me and my buddy wished each other good luck and we just waited for the countdown so we could get started. I was aiming for a swim around 40 minutes and I knew if I felt really good I could push it to about 38. Shariq and I started somewhere in the middle of the pack towards the right hand side, I dint get punched or kicked in the face so I was happy about that. The swim was pretty smooth, it was a wave start and before the turn buoy I realized I had caught up with people from the previous age group, so it was a confidence booster. I had to maneuver around them but nothing crazy since people were spread out after the first few 100 meters. One of other goals was to try and beat Shariq in the swim and the bike coz I knew he was gonna destroy me in the run by a margin of about 25-30 minutes. The swim is an elongated rectangle but I felt reluctant to push the pace thinking what if I tire out! But i just pushed it a bit in the last 300 meters or so and I went down straight to the wetsuit strippers, it took a few tries but it was faster the time I would have taken to get out of it. I saw my watch , it said 42 minutes and change, I was satisfied with the time.

Here is the map of the swim course:

The bike was a 2 loop out and back course. The first stretch before you get onto the rural highway which is closed to traffic was extremely bumpy. I saw water bottles fling out and before I realized my repair kit under the seat fell of. By the time I realized what had happened, it was too late to go back and get it. From there onward I just prayed that I don’t get a flat and if I do hopefully my buddy is behind me and he sees me and throws me an extra tube, CO2 canister and a tire level.

This would have been my first 50 mile bike, the longest I had ridden outdoors was 24 miles or so in the Olympic distance race and the longest on the indoor trainer was about 26 miles.But I was confident because I knew if i could grind out 26 on the trainer which has a lot more resistance I could probably do 50 on the bike without worrying too much. I do not have a power meter, I was relying on Garmin speed/cadence sensor. My goal was to keep my cadence around 90. Strategy was simple just bike at an effort which comes naturally, if the cadence is higher than 90, go to a harder gear , if the cadence is below 90 , go to an easier gear.  I was overtaking a lot of people so that felt good , but the strong bikers from the previous age groups with bikes worth $6000 and carbon wheels were flying past me . On your way back there is a slight downhillso I decided to push a bit harder to make the most of it. My goal was to finish the bike leg in under 3 hours. In the last 1 hour I was doing the math and looking at my watch and realized I would be cutting it close to 3 hours and I ended up with a time of 3:01 with no flats and no sign of my buddy yet. I was hoping he was still behind me. In my head I was like last one mile go on an easier gear and spin so your legs are ready for the run. I was confident thinking about the run, and was thinking I feel good, I will probably have a sub 2 hour half marathon at 9:10 a mile and i am having an amazing race so far.

Here is a pic of me looking pro on my bike and overtaking some of the age groupers since ours was the last age group(25-29) !

Here is where i was like BHENCHOD/FUCK , I cant feel my legs, this is not what I expected it to be. I’ve never had my legs feel like jelly before, this is the time I thought now I see why they ask you to do BRICK workouts! I was like its alright, it takes about 2 miles before you get into your rhythm. But wait, Muncie’s run is a rolling hill course, before I realized it I was walking up a hill ( there goes my goal for completing the the race unbroken!) ,I  looked at my watch ,was over 9:20 min a mile. I was like no biggie another mile or so, il be in my zone and I’ll be fine. But geez, the run course is like  a Sin Wave, up down up down..aagh. At 2.6 miles I heard someone say bhaag(run)! I knew it was my buddy, before I turned around he was next to me and smiled and he was flying !!. I yelled back at him, and a lady behind me was like you guys have a lot of energy. I was like not me, look at him go. To put things in perspective he ran the half in 1:34 at about 7:14 a mile. I could run that pace maybe for a 5k , but that’s about it. I knew there was no way I was gonna catch him, my new goal to try and reduce the deficit between our times and finish sub 6.

The volunteers were exceptional on the run course, they had aid stations at every mile of the course. I used everything Gatorade, flat coke., stuffed ice in my tri suit , used water sponges, gels. Anything which I thought could be useful i used it. I did have to stop for a pee break once. Finally i tried to keep up with someone ahead of me but in the end its just you confronting your inner demons. I kept  looking at my overall time and wanted to ensure I finish under 6 hours. In the end I did run the last 2 miles unbroken, tried to sprint the last quarter of a mile or so, raised my hands before the finish line, saw the photographer and decided to jump and punch the air for a good photo finish. 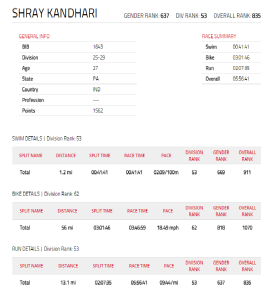 1- They did not have the pros race this year, it was just age groupers.

2- You might want to a motel in Anderson , about 20 minutes away from the the creek The motels in the area near by seemed really shady and sucked.

3- Muncie is rural, I thought I had seen rural but driving down and around Muncie I felt rural was an understatement.

5- I think its a decent race for first timers, since the water is pretty calm and the bike course is flat!